Risha Rox is an interdisciplinary artist working in installation, sculpture, body art and storytelling – a practice which she refers to as Corporealism. After graduating from the University of California, Berkeley in 2003 with a major in African Diaspora Studies, she began to develop her artistic practice in the rich black loam of Bedford Stuyvesant, Brooklyn, NY. Risha is also a graduate of the Master of Fine Arts in Interdisciplinary Arts program at Goddard College.

Seeking to exalt the base, temporal or ordinary and redefine commonly held notions regarding the human body and the Black body in particular, by inserting the largely missing Feminine Gaze, Risha’s practice is autoethnographical in nature. Risha a professional makeup artist working in film and television, is celebrated for her range from avant garde looks to basic beauty to light special effects.

CHM: Tell us about your Caribbean heritage and upbrining.
RR: My mother is from the beautiful and electric island of Jamaica! My mother was the first of 7 siblings to follow her parents (my Grandparents) to the United States. All came except one (who went to England) eventually came to Los Angeles, CA. LA was an unusual destination for Caribbean immigrants around the time of Jamaican independence. My family came as a result of their church opening an LA location. My sister and I were born here many years later. When she had my older sister, my mom decided to obtain US citizenship.

Although I was born in America, I was still steeped in my culture. I got to grow up with my grandparents, aunts, uncles, cousins and the larger church community. Therefore, I was never cut off from my culture. In fact, my grandparents retired to a fairly rural part of Southern California and went back to the “farming” lifestyle they grew up with. We had sugar cane and dinner all too often had been grazing right outside moments before slaughter.

CHM: How do you feel Caribbeans have impacted culture (world wide, in the U.S. or Europe and beyond)?
RR: Like Black Americans, I consider Caribbean people and Jamaicans in particular (forgive me) to be stars of the planet Earth. For such a small island, the global impact of Jamaicans on culture, spirituality and history is mind blowing. Jamaicans have a warm, vital and infectious culture that has captivated the hearts of people around the world.

CHM: What inspires your art?
RR: My autoethngraphic tales are deeply informed by my heritage as both a multigenerational Black Los Angelina and a first generation Jamaican American of East Indian descent. Also woven into my work are childhood and adolescent adventures in the great Marian shrine known as Los Angeles, and twilight animal slaughters followed by nighttime prayers in Ontario. There is magic, mayhem and death as I approach adulthood in Berkeley/Oakland. Also, velvet black nights and matrilineal meridian lines in mystic Jamaica and misty London, where thicker than fog blood ties have summoned me each decade of my life. The actual creation of my body of work though, was largely centered within the black, fertile loam of the Brooklyn, NY arts community, where I toyed with adulthood. And now, myself a mother, I find myself back in my own personal motherland, she of the sparkling sidewalks and smog-showy sunsets of Los Angeles, CA.

CHM: How did you begin your art career? What made you decide to become an artist?
RR: I’m a lifelong artist. While I have always drawn/painted/written and told stories, it was definitely a journey to proclaiming myself an artist and choosing it as a life path. The journey was organic and involved a curious blend of both brazenness and taking it easy on myself. There were times in my life where the work was not flowing and in which I was not seeing a lot of success in the outside world. However, being an artist is fundamentally, an inside job. I have faith in my path enough to know that, even in my stillness and seemingly quiet moments, I am collecting inspiration for my art…simply by living. Whether I am being productive or receptive, I am always an artist.

CHM: Tell us about your current work? What message are you trying to portray? What do you want viewers to get from your art?
RR: Based on a lifetime of sky gazing, my latest work Heavenly Bodies is autobiographical in nature. The paintings are depictions of the skies above very specific (to the minute and latitudinal/longitudinal point) times and places in the artist’s life. These skyscapes illustrate the moments which appear in her tales and exist within the psychic landscape from which she pulls visually, time and time again.

In creating this work, I was deeply inspired by African Cosmos: Stellar Arts, a fascinating exhibition that explored how the age-old legacy of African cultural astronomy intersects with both traditional and contemporary African artistic production. According to the exhibition statement, “For millennia, Africans have gazed upon the celestial firmament, made sense of the heavenly bodies above them…” In this way, I consider this body of work to join an ancient tradition, iterated through a Diasporic gaze. Heavenly Bodies is also informed by Sun-Ra’s 1971 University of California, Berkeley course, The Black Man in the Cosmos and his film, Space is the Place, made in 1972, in which he shares the concept of “the Alter-Destiny.” The alter-destiny is a speculative concept in which the Black person of the New World becomes the “living myth,” crafting an alternative future which embraces, engulfs and transcends the boundaries of the Diaspora, of past and future, using art and music as vessels to bear us into the Cosmos, our true home.

Heavenly Bodies refers to the bodies on which I have painted, the ways our movements and interactions with each other move the story of the world forward. It also refers to the various bodies we can see in the sky above, the gravitational forces and orbits of which push and pull us along, in a larger arc of story over which we have little control. Heavenly Bodies is inspired by and dedicated to the brief life of  my best friend, Tameko Shambrey (01/30/1979 – 01/30/1999).

CHM: Are there any upcoming events, projects and appearances you would like to showcase?
RR: Yes, I have new work coming in collaboration with Haitian artist, Val Jeanty. We have received a generous grant from the New York State Council on the Arts to produce a performance at Roulette Intermedium, one of New York City’s most exciting performing arts spaces.

Through The Eyes of Alexander James 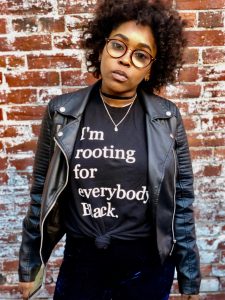